Lima, Perú, January 1639. The greatest Auto da Fe in the history of Spanish America is about to take place. Francisco Maldonado da Silva, the first graduated medical doctor that Chile ever had, is one of the numerous innocent victims condemned to die at the stake. This cultivated, honest, and bold man had made public his secret Jewish condition defying the hypocrisy, authoritarianism and corruption of his time. As a result, he was imprisoned by the Inquisition’s officials.

Accustomed to prisoners who accepted to suffer any humiliation to be sentenced innocent and thus be saved, the Inquisitors were shocked when they faced Francisco Maldonado da Silva’s resistance. In spite of the fetters and chains that secured his body, his knowledge of Christian and Jewish theology and history and the responses he provided were so brilliant that the officials were unable to subjugate him.

Christian theological figures and experts from every corner of the Spanish Viceroyalty traveled to Lima to debate with Francisco Maldonado da Silva, but he always managed to defy and refute their arguments. Faced with such an unprecedented case, the Inquisitors decided to lock him up in a solitary confinement cell where he was not allowed to read or write. With great patience, the prisoner sharpened a nail against a stone, used a chicken bone as a quill, and thus succeeded in making writing instruments. Ink was made of a mixture of water and carbon, while bags of corn flour which was the only food he ate served as paper.

In spite of twelve years of constant interrogations and physical torture, Francisco Maldonado da Silva persisted in his defiant attitude making it impossible to weaken his moral strength. Unprotected and helpless, he openly challenged the absolute power of the Spanish Inquisition in the Americas. In the last session of this ‘Tribunal of God’, Francisco Maldonado da Silva demonstrated his prosecutors and judges that the privations he had suffered had not prevented him from exercising freedom of conscience and worship. He even produced, from his ragged pockets, four hand-sewn books in which he described his ideas. The astonished Inquisitors considered him mad and ordered the texts to be burnt together with him.

Against the Inquisition: Using true historical events as the starting point, Marcos Aguinis denounces ideological and ethnic discrimination. This book recreates the period of the Inquisition and the colonial society of Spanish America using extensive research and the suspense and action typical of fiction. An Epic about freedom and individual rights that combines narrative suspense and poetical beauty, and it is as relevant in 17th century Peru as it is in our conflicted 21st century. 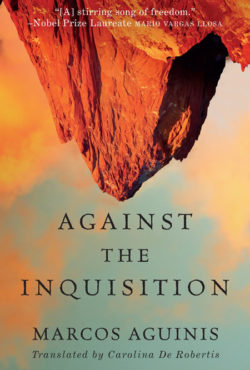