“They say I was contradictory from a very young age. There’s no doubt—ever since I left my mother’s womb. Perón was also contradictory, a man who simultaneously aspired to the sympathies of the United States and the Spanish dictator Franco.”

An expert in the art of “rising to the occasion,” Marcos Aguinis delivers here what is possibly his riskiest literary challenge: he gets under the skin of none other than Eva Duarte de Perón herself, to narrate from her point of view (using the voice of Evita herself, today) the complexities and chiaroscuro of her life, death and transcendence.

“Some say that my luck was directed by misfortunes,” says Aguinis’ Eva, while flying to her destination, adding, “How simplistic those interpretations are! What a lack of imagination!” Turning those words a mandate, the author of The Passion According to Carmela and The Inverted Cross unites imagination with rigor so in his depiction of “the spiritual head of the Peronist movement,” ordinary places explode in the air, achieving a portrait that is both controversial and eerily truthful, a historical revision narrated with the electricity of a fictional thriller. 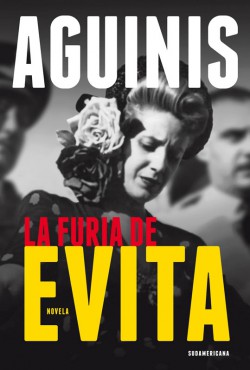