The Literary Saga of Marcos Aguinis

The collection of critical essays in this volume represent an act of justice and necessity, in recognition of this multifaceted argentine author. It is an act of justice and necessity because no one can deny the importance and great artistic quality of his novels, short stories, and essays, which are inserted in the core of Argentina’s, and, therefore, of Spanish America’s, reality.

In broad outline, the essays integrating this volume coincide in that the fictional discourse of Aguinis’ texts, especially “La Cruz Invertida”, “Elogio de la Culpa”, and “La Gesta del Marrano” distinguishes itself in its contention that literature has an unavoidable responsibility towards history; thus it is a medium for raising awareness of the reader regarding the conflictive sociopolitical and religious state of the Argentine Republic, which is projected by association to the whole western culture. As a first attempt at embracing the whole of Marcos Aguinis’ literary production, this volume represents a very important contribution to the study of argentine and Spanish American literature. 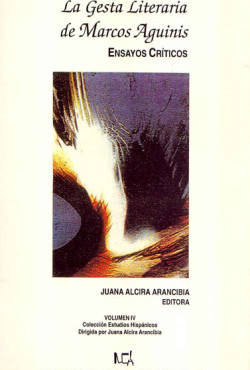