The Passion According to Carmela

The Passion According to Carmela is a captivating love story between a Cuban female doctor and an Argentine economist. Their erotic and ideological vicissitudes are driven by a reality they cannot control, like that of Homer’s characters. Invisible gods intervene in their lives to intertwine their physical attraction and intellectual admiration, courage and fear, secrets and unexpected complicity. They build their difficult and beautiful love in one of the most turbulent and romantic scenarios of Latin American history. They swim with the current; they enjoy it and enlarge it. But they are also dragged along by eddies that leave them breathless and turn their world upside down. Aguinis’ titles tend to be paradoxical. However, for this novel, he has preferred to place emphasis on the multiple meanings of the word passion. Passion refers to love, and also to the strength of ideals, to suffering, pleasure, salvation and the yearning for freedom. The emotional combat of the protagonists runs in parallel with the dizzying brilliance of concrete situations. This is what allows the suspense to grab the reader from the first page to the very end. A free-flowing, sweeping, and thrilling rhythm dominates the text, like that of musical passions. It should come as no surprise that this novel—where the voices of the female protagonist, her lover, and the omniscient writer alternate—has been written following Bach’s counterpoint model. From a distance, ineffable, we still hear the resounding epic of another war where the liberators sang to a different Carmela—also a torch, also a passion. Aguinis portrays his creations skillfully and renders them indelible. His skill in handling emotions does leaves no line void of poetry or consequences. And his extremely accurate style is a grounding that turns this work—situated in exceptional times—into one of the best love stories to mark out the course of literature. 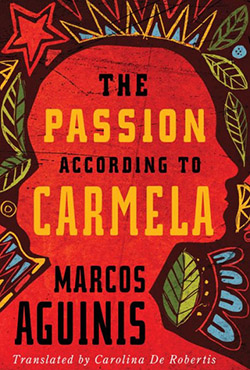