Guillermo Brown is one of the key characters in argentine history. Nevertheless, the treatment history awarded him has often obscured the man and starched the hero. This book by Marcos Aguinis -“this biography with a novel’s rhythm,” as he himself defines it- is also a lucid and successful rescue operation. It rescues the hero and the personality, because Admiral Guillermo Brown is shown in his entire epical dimension, without erasing or excluding those traits that turn him into the protagonist of an adventure book. As the author points out, it is the story of a person whose changes of fortune would have ignited passion in the hearts of both 19th and 20th century novelists. Doubtless, its readers will feel the same passion.

Written at a difficult time, when uncertainty and despair rendered the making of such a work unthinkable, El Combate Perpetuo conveys an invitation to be read and re-read as a fascinating tale and as a different treatment of history, never schematic or ambiguous, always rigorous and intelligent.

“I recall the mixture of enthusiasm and dread I felt while writing Guillermo Brown’s biography. Those where years of pride, manicheism, and corruption, carefully disguised with great doses of hypocrisy. At the time, one of the most valued stratagems for concealment was the worship of heroes, a rigid, cold, stereotyped cult that loves outward appearances. I wanted to humanize the hero, to re-flesh him, to portray his ambition, his weariness, and his anger; I wanted to render his prowess believable, thus recovering our capacity for admiration. I wanted to get back at those sleep-inducing textbooks that thwarted my youthful learning of argentine history. My proposal was that we should be indirectly moved by history in order to achieve a better vision of our present.” 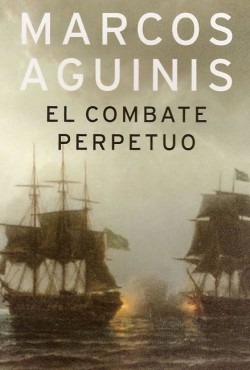